When you are processing large volumes of data, a large proportion of the data may be considered to be irrelevant to your analysis. For example, you may only be interested in infrequent, unusual occurrences within the data streams.

In this case, a Streams Application can be used to filter the data, reducing it to the items of significance. The application might analyze the data stream, identify the elements of interest, and create a new stream of data from the significant items. With this new stream, a reduced number of these valuable parts will be processed by the remainder of the Streams Application.

Figure 3-3 shows the principle of the Filter pattern. The application reduces the volume of data so that the output is more manageable.

###Example In financial services, you might be interested in price changes for stocks in your stock portfolio. You can consume a feed of data from the stock market and use a filter to reduce this feed down to only the stocks of interest to you.

In a health care situation, a large volume of readings will be generated from medical sensors. These will usually stay within an expected range, but when they fall outside this range, an alert needs to be raised. A filter can be used to detect the dangerous sensor readings.

###Stereotype A simple implementation of the Filter design pattern illustrating value identification and extraction is shown in Figure 3-4. In this illustration, a Source Operator reads in the data stream and a Functor Operator is used to determine the Tuples of interest and only passes these on to the Sink Operator, which sends theses to the relevant recipients.

####Stereotype walkthrough Here are brief descriptions of the steps involved in the stereotype:

###Variations There might be variations in the process, but they may be handled by the following types of options:

Some sample code that illustrates how that implementation might be supported is shown in Example 3-1.

###Suggestions When processing high volume streams, you should consider filtering the streams to reduce their volumes as soon as possible after they are ingested. This can reduce the total processing workload of the Application, allowing a higher volume of throughput, with lower latency and potentially using less hardware. 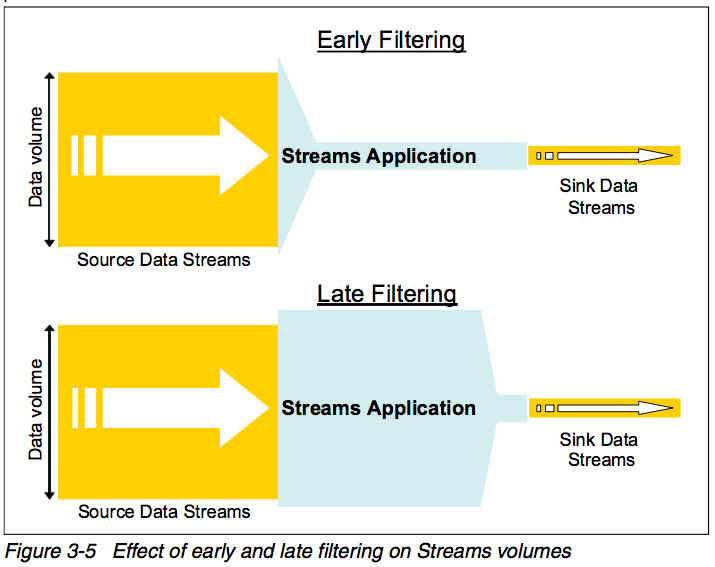