The Review Process for NIPS 2016

The Review Process for NIPS 2016

In an effort to bring transparency to the NIPS 2016 reviewing process, we describe in this page the main steps and the new features we implemented. This is the result of the joint effort of the program chairs (Ulrike von Luxburg and Isabelle Guyon) and the program team (Krikamol Muandet and Behzad Tabibian, partly also Rohit Babbar). We are most grateful to our 100 Area Chairs and the 3400 Reviewers for all their input and support. We are much indebted to Neil Lawrence for sharing his scripts from the NIPS 2014 conference (documented in his blog). Thanks also to the NIPS Board for their input, though they may not endorse everything we did, and the CMT support team. Last but not least, thanks to all the 6000 authors who contributed their time to prepare alltogether 2500 papers for this year’s NIPS. We hope to see many of you at the conference!

Area Chairs (ACs) are the backbone of the NIPS reviewing process. Each AC typically handles 20-30 submissions. Hence, we needed to recruit about 100 area chairs. As it is impossible to intimately know all the diverse research areas covered by NIPS, we came up with the following procedure:

The process of recruiting reviewers is very time consuming, it essentially went on from January until the submission deadline end of May. New this year, we had two kinds of reviewers, “invited senior reviewers” and “volunteer reviewers”:

An obvious difficulty was that we could not control the quality of the volunteer author-reviewers. We addressed this by keeping invited reviewers and volunteer reviewers in two separate pools. In the end, we had the following number of reviewers:

We received about 2500 papers by the submission deadline. As is often the case, most submissions were made right before the deadline: 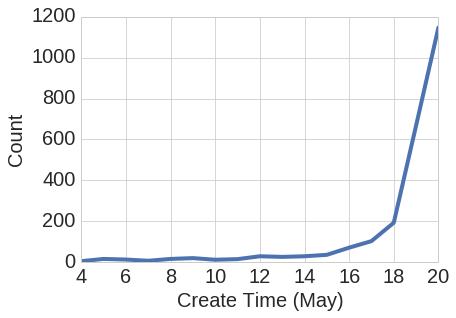 The deadline was strictly enforced, regardless of personal situations, we are sorry for those who missed it. During the next couple of weeks, a number of papers were withdrawn or deleted by the authors (for example, because they had been submitted twice, or remained unfinished at the time of the deadline). By the end of the review process, we were left with 2406 submitted papers.

The assignment of papers to Area Chairs was a multi-step procedure:

The assignment of papers to reviewers was largely new this year:

We completely changed the scoring method this year. In previous years, NIPS papers were rated using a single score between 1 and 10. This did not allow reviewers to give a differentiated quantitative appreciation on various aspect of paper quality. Furthermore, the role of the ACs was implicitly to combine the decisions of the reviewers (late integration) rather than combining the reviews to make the final decision (early integration). Introducing multiple scores allowed us to better separate the roles: the reviewers were in charge of evaluating the papers; the ACs were in charge of making (rational) decisions based on all the evaluations. Furthermore the multiple specialized scores allowed the ACs to guide reviewers to focus discussions on “facts” rather than “opinion” in the discussion phase. We asked reviewers to provide a score in each of the following categories:

We also asked the reviewers to flag “fatal flaws” and declare their overall “level of confidence”. The scores had to be complemented by justifications in designated text boxes.

The following histograms show the distribution of average scores for all papers (where the average is taken over all reviews for each paper).

The ACs were given a lot of flexibility to use the scores. In particular, the decisions were not based on thresholding an overall score (we did not even attempt to compute such an overall score). The text explanations in the reviews, the rebuttal, and the discussions among reviewers played an important role.

Once most of the reviews were in, all authors had the possibility to look at the reviews and write a rebuttal (some reviews were still missing at this point, but it would not have helped to delay the rebuttal deadline, the missing reviews trickled in slowly). Subsequently, area chairs and reviewers engaged in detailed discussions about the pros and cons of the submitted papers. To support the ACs, we sent individual reports to all area chairs to flag papers whose reviews were of too low confidence, too high variance or where reviews were still missing. In many cases, area chairs recruited additional emergency reviewers to increase the overall quality of the decisions.

Two novel elements were introduced this year in the decision process:

The decision process was largely based on AC “buddy” suggestions. The first round of decisions happened in a moderated, but decentralized fashion: each area chair worked with her/his “buddy”. The two of them were responsible for all papers in their joint bag, and made their decisions jointly, following guidelines given by the program chairs. Difficult cases were taken to the program chairs (among them, cases conflicts of interest and plagiarism). To harmonize decisions across buddy pairs, all area chairs had access to various statistics and histograms over the set of their papers and the set of all submitted papers. In a second round, the program chairs consolidated the decisions. This mainly affected the selection of oral presentations, with the goal to exhibit the diversity of NIPS papers and to expose the community with novel and thought provoking ideas. All in all, 568 papers got accepted to the conference, among them 46 oral presentations.

Below is a plot of the distribution per subject areas (combined primary and secondary subjects), both for submitted papers and for accepted papers. Of course the proportions are not identical, but the plots do not show any systematic bias in favor or against certain areas.

With a review process of this scale it is unavoidable that among the rejected papers there are hidden gems that simply drowned in the review process. For this reason we organized an exhibition of rejected papers, in a spirit similar to the Salon de Refuesés. In this exhibition, you can find a list of those rejected NIPS submissions whose authors decided to take part in the exhibition.